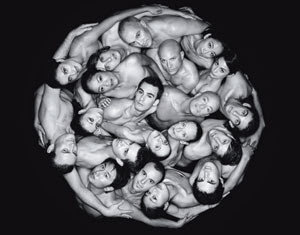 Richard Watts speaks with the Sydney Dance Company’s outgoing artistic director Graeme Murphy, on the eve of his departure.

After 31 years with the Sydney Dance Company, choreographer and artistic director Graeme Murphy has programmed the ‘farewell premiere season’ of his latest work, Ever After Ever, to thank audiences for their loyalty and patronage. The production, which opens this week at the Arts Centre, consists of a new work, Short Stories, together with a ‘greatest hits’ program of extracts from some of Murphy’s most popular works to date.

“It’s an opportunity to pass a backwards glance over works that Melbourne has really embraced over the last decade or so; works that were really the pinnacle of our creative development, and to bring with it this bitter-sweet last farewell serenade to the dancers, which is Short Stories,” Murphy tells MCV.

Ever After Ever also provides Murphy with the opportunity to once again work with composer Carl Vine, who he describes as “one of ’s greatest treasures.”

“Carl was our resident pianist in [1978],” Murphy explains. “I can’t believe that we had one of our greatest composers playing plonketty-plonk for class; but he always said it was some of the absolute best discipline, in terms of having to be rhythmic, having to be aware of dancers and movement. He holds that period very dear, and of course that was the beginning of a long-term relationship between us.”

Working collaboratively with people like Vine has enabled Murphy to develop some of his most memorable and acclaimed dance pieces during his three decades with the company.

“It’s [the result of] a relationship that develops with time and understanding, until you get this amazing shorthand, but more than that, you get this connection, so that if you say something; and I tend to say things in poetic brevity,” he laughs dryly, “they get it, and they take it somewhere, and with confidence.”

“It’s a trust thing,” Murphy continues, “and to me, that’s been the whole basis of the period that Janet and I have been involved with Sydney Dance Company.

In 1976, the ambitious young Murphy was appointed to what was then known as the Dance Company of NSW, and entrusted with the mission of revitalising the moribund company. Ably assisted by his wife and co-artistic director Janet Vernon, Murphy did just that.

Despite their many triumphs since, last year the pair shocked many in the art world by announcing their joint resignation. They were, they said in a media statement at the time, worn down by the persistent struggle to convince federal and state funding bodies of the importance of the arts in a world where sport and war took centre stage. It’s clear that Murphy’s stance on this subject has not changed.

“I don’t think we, as a nation, are looking in the right places for our future,” he says passionately.

“I do think that we really need to look at ourselves very, very closely and say what is really important. If you do that you’ll find that great art, the survivor of all holocausts and horrors, is the one thing in history that tends to survive. Beautiful, creative, philosophical works of art, in many forms, outlive the obvious hedonistic pleasures that we all seem to be struggling and striving for.”

Posted by richardwatts at 5:30 pm

THAT'S the beautiful picture i was telling you about...isn't it wonderful?

It is a lovely image, I agree, kp. Am seeing the performance on Thursday; hopefully that's lovely as well!